The "hydrographic datum" or "chart datum" is the level of water that charted depths displayed on a nautical chart are measured from. Likewise, tide tables give the height of the tide above a chart datum. 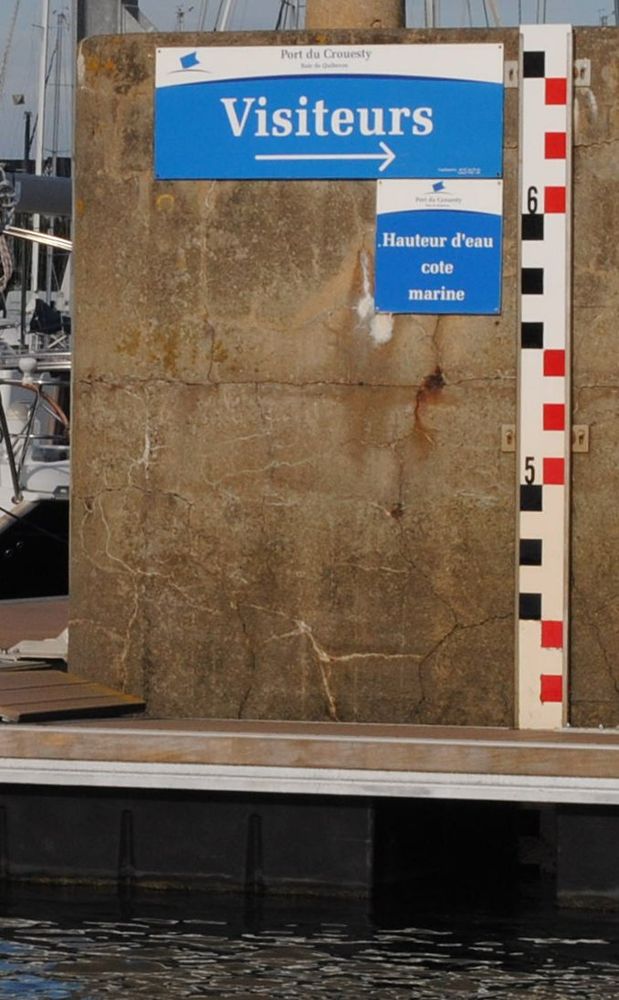 Near coastal tide gauge stations, these two problems are solved by analysing the observations and referencing them to nearby benchmarks, which themselves are referenced in terrestrial levelling networks.

The chart datum must meet the quality criteria required for any reference system, namely:


Accuracy of the chart datum

The notion of accuracy has two aspects:

Accuracy of the chart datum with respect to the definition

Chart datum is defined somewhat arbitrarily, which allows a certain freedom as evidenced by the different definitions still in use. By using the lowest astronomical tide as chart datum, navigators can easily determine which chart sounding to look at when calculating the tide, but extremely high accuracy is not required: the soundings are often referenced to the approximate lowest astronomical tide on nautical charts.

Accuracy of the chart datum reference in a benchmark.

Once the chart datum has been selected, it must be referenced to a stable and accessible benchmark. This is very important because the chart datum becomes the vertical reference and must be extremely stable. For coastal tide stations, referencing to benchmark must be done with utmost care so that subsequent levelling operations will not affect it. Accuracy should be within one millimetre. This level of accuracy is obviously not necessary for shipping, but it is key to evaluating the stability of the benchmarks and for studies on changing sea levels.

Accessibility of the chart datum

Accessibility of the vertical reference using the traditional method

During standard hydrographic surveys, the two directly accessible surfaces are the surface and the sea floor. The sea floor can be used in rare cases to find the height of the chart datum near a tide gauge whose levelling benchmarks have disappeared. In practice, for traditional surveys, the only reference available is the surface, which is not stable and can only be a provisional reference.

The usual procedure is based on the concordance method that models the correspondence between the tides of two neighbouring points by linear regressions. It can also be thought of as a geometric levelling operation based on the sea level to reference the water level to the only known benchmarks which are generally located on the coast near the tide gauges. The chart datum is situated relative to the surface of the sea, at the place and time of the measurement, using harmonic constants from a tidal model and the gap assumed to be constant in the space between the nominal mean sea level and the instantaneous mean sea level.

Satellite technology provides a different solution to the problem of datum accessibility for reducing soundings.

First, it is possible to accurately reference the sea floor to a terrestrial benchmark without a using the sea level and therefore without a tidal model. It is therefore an absolute and lasting reference, which is one of the great advantages of these techniques. It is not currently possible to do this in real time in a global reference system (ITRS for example), but it can be done close to a terrestrial reference station and linked accurately to this reference station.

To be precise, we must also take into account the movement of the base, which can be considered identical in an area of a few tens of kilometres for the earth tide, but not for movements caused by ocean loading, where gradients of the order of 1 cm per 10 km3 have been observed. Unlike the traditional method where the tidal model (calibrated on observations at the coast and at sea which encompass both movements of the sea surface and the sea floor) also compensates for movements of the base, the spatial method, even in certain limited areas, should take these movements into account to maintain accuracy.

It is also possible to precisely position in a geodetic reference frame (ellipsoid) the mean sea surface obtained by altimetry. Topex-Poseidon and the Jason satellites have yielded satisfactory results. Accuracy deteriorates near the coast because of the low resolution (10km) and because land areas may be included in the calculations, but it is possible to remedy this by using tidal observations made at the coast referenced to a specific geodetic system. As for the traditional method, the chart datum must also be determined and referenced to current reference systems that are local (tidal zones), by using the the nominal mean sea level. This consists of correcting the mean sea surface for the differences between the mean level calculated at the reference tide gauge during the altimetric measurement period and the nominal mean sea level and applying the results of the tidal model to position the chart datum at any point in the tidal zone. Knowing the ellipsoidal height of the mean sea surface, we deduce the ellipsoidal height of the chart datum. The basic reference is always the chart datum of the reference port.

Stability of the chart datum

The notion of stability of a benchmark raises the question: stability in relation to what? This usually depends on the problem at hand: for tide gauging, the stability criterion is such that the water level values cannot be called into question by successive realizations of the reference. This includes stability of physical benchmarks whose height with respect to the chart datum is determined with precision.

The nominal mean sea level has acquired the status of vertical reference, during procedures for positioning the chart datum using traditional techniques. Accessibility offshore is ensured by means of a model which calculates its height compared to the free surface at the place and the time of the sounding.

Stability for the reduction of soundings

The question of the stability of the nominal mean sea level chosen as vertical datum does not arise in terms of the accuracy of its height with respect to the free surface (which actually translates into uncertainty on the reduced soundings), but in terms of the appropriateness of choosing this reference surface to solve the problem of reducing soundings. For coastal tide stations, the vertical datum is indicated by the tide gauge benchmarks, because their potential vertical movements should be similar to those affecting nearby coastal areas. This is also true for the nominal mean sea level, whose height in relation to coastal landmarks is fixed.

Due to reduction procedures, potential vertical movements of the tide gauge impact the stability of the vertical datum for distant points where vertical movements of the land base may not be the same as those of the tide gauge. This problem can be solved properly only by taking into account the geodetic positioning of coastal tide gauges surrounding the survey area and modelling potential movements, offshore and on land. Finally, when using submerged tide gauges, another difficulty involving stability stems from the possible slow evolution, not detected during the measurement period, of the mean slope of the water surface between the survey area and the port of reference. Coastal modelling systems of the (coupled) meteorological and oceanographic effects should help quantify the slope.

Stability for predicting the tide

Due to stability and accuracy requirements, ITRS is preferred to WGS 84 for references obtained using satellite technology. To set the chart datum, it is still necessary to use the nominal mean sea level, local and extended based on the mean sea surface, (adjusted to the nominal mean sea level at the reference port) as long as the current tidal zones are in effect), or based on the mean sea surface (established over a long period that is chosen carefully) when we move towards a generalized continuous chart datum. But the nominal mean sea levels loses its benchmark status, because after it is used to locate the lowest low water level in the reference ellipsoid, it acquires the status of chart datum whose ellipsoid height can be permanently set, which solves the problem of the stability of the reference. But the question of the appropriateness of choosing the reference ellipsoid arises because unlike the nominal mean sea level, based on coastal benchmarks, the ellipsoid is independent of vertical movements of the terrestrial benchmarks which, if they exist, can induce changes in the valuesof the soundings. This technique should be accompanied, if necessary, by geodetic monitoring of vertical movements of nearby tide gauge benchmarks (which must be taken into account in the various relations of the ITRS) and modelling of movements of the base.

Other tide gauge applications to explore: