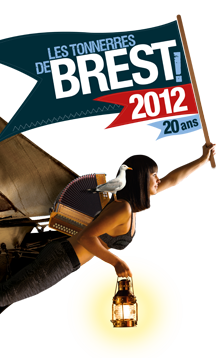 Tonnerres de Brest 2012, the major international maritime festival begins on 13 July 2012. In addition to the gathering of old sailing vessels, exhibitions and a range of other activities are available for you to discover, such as the village of sciences and technologies of the sea. Amongst the themes developed is the question "Is the sea level changing?" SHOM, partner of "Tonnerres de Brest" and the village of the sea, in collaboration with the Commissariat à l'énergie atomique et aux énergies alternatives (CEA) (the French atomic energy and alternative energy commission), Météo-France and the Institut Universitaire Européen de la Mer (IUEM), is presenting the tide gauging stand: "The sea level: observe, predict and understand. A world reference, a unique observatory: Brest, on the leading edge of tide gauging technology for the last 300 years".

Several items of equipment are exhibited on the tide gauging stand. They include:

In addition to the panel explaining the ins and outs of the increase in ocean levels, the focus is placed on several applications of tide gauges: