A multi-sensor experiment was conducted on Aix Island on 27 and 28 March 2012. In this experiment organized by LIENSs, three organizations (CNRS/INSU, IPGP and SHOM) deployed buoys equipped with GPS antennas, designed to measure sea level. The water levels obtained with the buoys were compared to those provided by the RONIM permanent tide gauge (LIENSs, SHOM, CG17, Ile d'Aix) installed on the island to assess their accuracy. The first results show that the sea level data provided by these two types of instruments coincide. 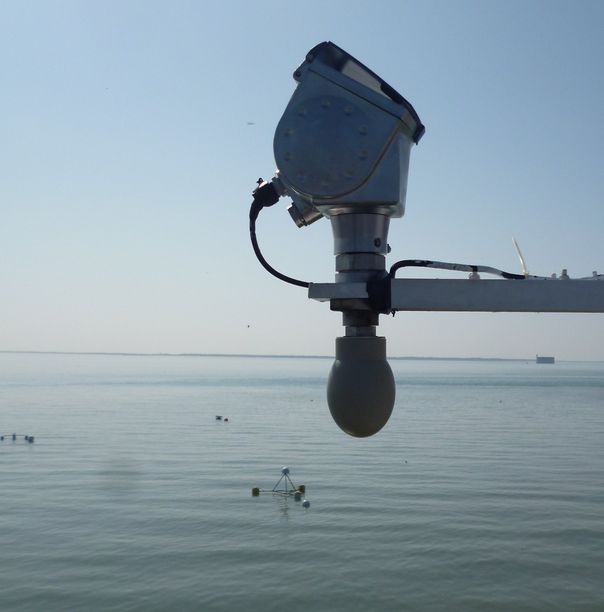 Deployment of the 3 GPS buoys during the multi-device campaign organized by LIENSs at the RONIM tide gauge observatory on Aix Island. In the foreground: the RONIM tide gauge; in the background, left to right: the SHOM GNSS buoy, the IPGP GPS buoy, the LEGOS/DT-INSU GPS Buoy and Fort Boyard (Photo credits SHOM, S. Enet, March 2012). Click on the photo to enlarge.

Presentation of the multicomparison zone

On 27 and 28 March 2012, three prototype GPS buoys were deployed on Aix Island (Charente-Maritime), near the Barbotin pier in a relatively sheltered area some 10 meters deep near the permanent tide gauge and a tide staff to study the accuracy of this type of sensor for measuring sea level.

Ile d'Aix, a sea level observatory equipped with a radar tide gauge, a weather station and a permanent GPS station. Trajectories of the GPS buoys (photo source Géoportail, 2013 as amended). Click on the photo to enlarge.

Presentation of the GPS buoys and other devices

The three buoys with GPS antennas used in the experiment were independently developed by the CNRS/INSU (National Institute for Earth Sciences and Astronomy of the National Centre for Scientific Research), IPGP (Institute of Earth Physics of Paris) and SHOM (French Naval Hydrographic and Oceanographic Office).

Presentation of the three GPS buoys from left to right: the SHOM buoy, the CNRS/INSU buoy and the IPGP buoy. Click on the photo to enlarge.

Near the deployment area there is a permanent tide gauge observatory comprising a RONIM radar tide gauge (LIENSs, SHOM, CG17, Ile d'Aix) that transmits real-time sea level measurements and a tide staff. Also note that on March 28, water levels were measured manually over one tide cycle using the tide staff and an electric tape gauge. Additional measurements (not used later) were taken, including gravity, current meter and levelling measurements.

The Van de Casteele test is used to evaluate the performance of a tide gauge (IOC, 1985 Martin Miguez et al, 2008.). It involves the simultaneous measurement of the water level by the tide gauge being calibrated and the sensor used as a benchmark. The differences between the two measurements are calculated (ΔHe) and indicated on the X-axis while the ellipsoidal height of the sea level (He) is plotted on the Y axis. Assuming that the benchmark sensor provides accurate data, a vertical line centered at zero would indicate that the tide gauge tested also provides good data. In our case, the visual measurements taken on the tide staff on March 28 were used as a benchmark. Although rudimentary, this type of visual measurement taken by experienced operators in calm sea conditions can be very reliable.

After checking the quality of the radar tide gauge measurements, it was used as a benchmark to evaluate the accuracy of the GPS buoy measurements. Several factors may explain the differences in height measured by the GPS buoys visible in the two figures above (André et al, 2013.):

Despite these differences, the overall results show that the three buoys provide sea level measurements comparable to those of the radar tide gauge.

The encouraging results obtained in this experiment open up exciting new perspectives: